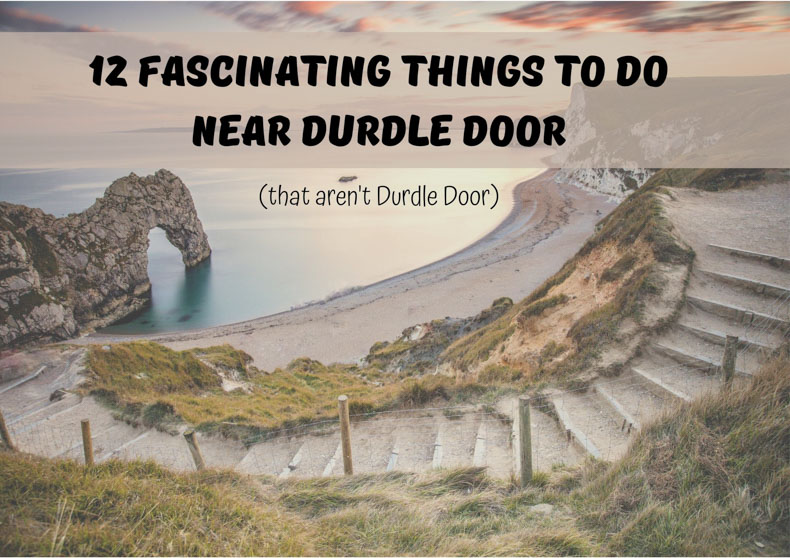 12 Fascinating Things to do Near Durdle Door

There are many things to do near Durdle Door other than the famous limestone arch, and that’s what I’ll be covering in this blog post. By the end, you’ll have a jam-packed itinerary, whether you’re visiting the Jurassic Coast for a day, a weekend, or even a week.

Durdle Door is one of the most beautiful and iconic spots in all of the UK. A natural limestone arch formed over 10,000 years ago stood perfectly in pristine waters; it’s truly a sight to behold.

It’s no surprise that hundreds of thousands of visitors travel from far and wide to catch a glimpse of the famous archway every year. However, many don’t realise that Durdle Door is just a tiny part of the colossal Jurassic Coast.

Stretching for 95 miles along the South of England, the Jurassic Coast is the UK’s first natural world heritage site. It’s famous for its diverse, rugged coastline and outstanding geology, revealing over 185 million years of Earth’s history.

While there’s no denying that Durdle Door is an unmissable experience, here I’m going to be sharing some other lesser-known sights that are equally worthy of a visit. So whether you’re camping near Durdle Door or staying somewhere else nearby, be sure to save this article for your trip.

Let’s get to it. Here are 12 things to do near Durdle Door that aren’t Durdle Door.

12 Fascinating Things to do Near Durdle Door

You don’t need to walk too far from Durdle Door to reach the first spot on our list. Man O’War Beach is just east of the archway, beyond the steep rocky headland you see when walking along the coastal path.

It’s actually impossible to miss if you’re walking from the Durdle Door car parks or campsite, as it’s the first viewpoint you see. The stunning coved beach hugged by the rugged coastline is sure to grab your attention.

If you’re planning on some beach time and a swim, I’d recommend Man O’War Beach over Durdle Door. Both are pebble beaches and boast crystal-clear water; However, in my experience, the sea is less choppy at Man O’War, and it’s generally less busy.

Even further east of Durdle Door is Lulworth Cove – another picturesque coved beach that’s almost a perfect circle. Being the closest beach to the village of East Lulworth, it’s relatively built up here with some restaurants, pubs, souvenir shops & hotels.

Personally, I don’t find Lulworth as inviting as Durdle Door and Man O’War beaches, largely due to the number of boats that dock here. However, I would still recommend the pleasant walk from Durdle Door to Lulworth Cove to check it out.

For the best view of Lulworth Cove, climb up onto the headlands on either the left or right-hand side. That way, you’ll get a spectacular birds-eye view.

If you head up the headlands on the right, you’ll also encounter the Stair Hole, which is next on our list. Whereas, if you climb on the left, you can visit the Fossil Forrest, which is number 4 on our list.

To the west of Lulworth Cove lay the Stair Hole, otherwise known as the Lulworth Crumple. If you have ever wondered how erosion contributes to shaping our coastlines, visiting the Stair Hole will help you understand.

From the viewpoint of the headlands, you can see how the once flat sedimentary beds have been twisted and crumpled by natural forces to create fascinating patterns and forms within the rock.

As well as caves, blow-holes, and arches, you can see that a cove is forming. It allows you to imagine what Lulworth Cove might have looked like 10’000 years ago. It’s kind of mind-blowing, to be honest.

If you climb up to the headlands on the East side of Lulworth Cove, be sure to check out the Fossil Forest. Here lie the remains of an ancient submerged forest from Jurassic times.

Experts say there’s evidence that a forest of conifers, tree-ferns and cycads grew here a mere 145 million years ago.

Again, it’s kind of surreal looking at the rock formations. I can’t even begin to comprehend the history behind them. But it’s definitely a must-see while you’re in the area.

One of our favourite things to do near Durdle Door is to go on walks. There are many opportunities to explore the Jurassic Coast and surrounding countryside on foot, which always leads to an unexpected adventure.

There are a ton of walking trails in the area, which cater to various skill and fitness levels. So whether you want to spend the entire day hiking through challenging terrain or simply take a gentle walk along the coast, there’s something for everyone.

The best way to locate trails is by checking out walking apps or websites such as All Trails or Komoot. Alternatively, you can pick up walking guides and maps from the Lulworth Cove Visitor Centre.

If you fancy a break from coastal walks and beaches, you might consider visiting the impressive Lulworth Castle.

Once a 17th-century royal hunting lodge, the castle is a magnificent building steeped in history, which you can explore via a tour and the museum.

The stunning spacious grounds are also there to enjoy, where you can wander through woodlands and take in the breathtaking countryside views.

Another exciting thing to do near Durdle Door is to visit the Corfe Castle ruins. The castle is thought to be over 1000 years old and was once a royal palace and fortress.

Unfortunately, the castle was destroyed after the English Civil war. However, the ominous ruins are still an impressive sight to see nonetheless.

These days the site is run by the National Trust, so it’s a little on the pricey side. But it makes for an interesting day out, and it’s worth it to see the pretty Corfe village which the castle overlooks.

Old Harry Rocks are two chalk stacks that mark the most Eastern point of the Jurassic Coast. The formations were initially a part of the same coastline as the Needles on the Isle of Wight. However, years of erosion has resulted in the way we see them today.

Old Harry is the largest rock formation out of the two. It’s believed that the name, Old Harry, refers to the devil who legend says once slept on the rocks. The smaller formation next to Old Harry is referred to as Old Harry’s Wife.

Other than Durdle Door, Old Harry Rocks is probably the most recognisable landmark along the Jurassic Coast. It’s only a 35-minute drive between the two, so if you have access to a vehicle, it makes for the perfect day trip.

If you don’t mind the 1-hour drive, visiting Bournemouth is easily one of the best things you can do near Durdle Door.

A far cry from the serene village of Lulworth, Bournemouth is an energetic seaside city. It’s home to one of the UK’s most beautiful beaches boasting pristine golden sand that stretches for miles.

There’s a ton of things to do in and around Bournemouth that will keep you entertained for hours, so I recommend spending an entire day here. Or even an overnight stay if you have the time.

A 30-minute drive west of Durdle Door, we have Weymouth – another atmospheric seaside town that’s well worth a visit.

It’s a little tacky and outdated when you compare it to Bournemouth, but that’s part of its charm. We only got to spend a little bit of time here, and we both wished that we’d had more.

Highlights of Weymouth include its sandy beach dotted with colourful beach huts and the vibey harbour area with its plentiful bars and restaurants.

Just South of Weymouth is the Isle of Portland. As the name suggests, it is an island; However, a barrier beach known as Chesil Beach joins it to the mainland. You can quickly drive there in 15-minutes from Weymouth.

We spent two nights on the Isle of Portland on our recent road trip of Dorset to Cornwall. We had no idea what to expect before our visit, but it turned out quite the hidden gem.

Considering the island is just 6km long by 2.7km wide, there’s actually quite a lot to do. There’s a handful of beautiful beaches, a fascinating quarry, and a picturesque coastal path walk, not to mention castles, lighthouses and viewpoints.

For our final recommendation of things to do near Durdle Door, we have the stunning golden cliffs of West Bay. Broadchurch fans might already recognise it, as most of the show is filmed here.

I love how as you move from East to West, the Jurassic Coast evolves from while chalk to grey limestone to golden sand. You get a truly unique view and experience in every place that you visit.

If you make it to West Bay, it’s worthwhile stopping by Bridport. Bridport is a lively and quirky market town with an excellent reputation for arts, culture, events and food. We didn’t make it on this trip, but it’s on our list for next time.

Thank You for Reading

Well, that concludes our list of things to do near Durdle Door. What are you looking forward to seeing most? Is there anything else that you think deserves to be on this list? Do you have any other questions?

Let us know! We love hearing from you. You can reach out to us in the comment section below or through our contact us page.

Planning a trip to the UK? Check out our other articles to help plan your trip.

Disclosure:  Some of the links in this post are affiliate links. That means that if you purchase through these links, we will earn a small commission, at no extra cost to you. And we can continue bringing you free travel tips and advice.  If you use our affiliates, you are awesome, and we thank you!

PIN IT FOR LATER 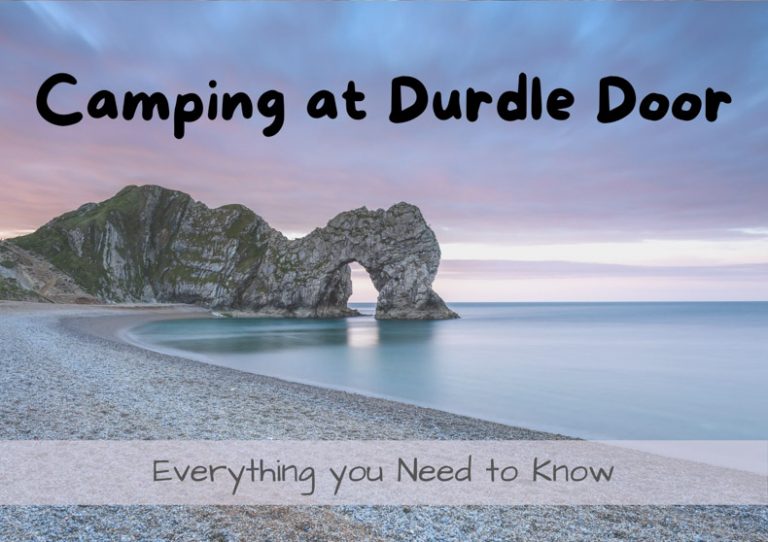 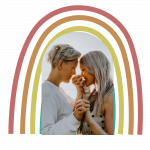 We’re Charlotte & Natalie, a British lesbian couple with a passion for travel and adventure.

Here you will find everything from LGBTQ+ travel & lifestyle advice, to comprehensive guides and itineraries designed to make your travel planning easier.

We want to inspire you to live the life of your dreams.

💌 Get discounts & updates in our monthly newsletter

Get discounts & updates in our monthly newsletter

© 2022 Our Taste For Life Blog – All Rights Reserved. Website Designed by us via Fresh Creatives